In return for performing work, workers receive benefits in the form of consumption rights for goods and services. If we think of what the economy produces as one big pie, every worker is allocated a slice, or share of the social product, which is called income. It is essential for an economy to have a criterion for distributing income, not only for making sure it is distributed fairly, but for practical reasons as well. Quantitative information is necessary for the allocation system, described under participatory planning, to function at all, not least to be efficient.

In our current economy, an individual’s consumption rights depend on a variety of factors, including ownership of productive property, bargaining power, talent, training, luck, and to a far lesser extent, effort, which results in an unequal and unfair distribution of burdens and benefits of economic activity. However, the only factor under our control is our effort.

Therefore, a Participatory Economy will aim to compensate workers according to their effort or personal sacrifice for performing socially useful labour.

Worker councils are advised to set up procedures in order to provide members with an ‘effort rating’. This means that those who choose to make greater personal sacrifices at work are rewarded with greater consumption rights. As explained before, effort can take different forms: longer working hours, at a higher intensity, or by performing more dangerous, unhealthy, less gratifying, or unpleasant work.

It is important to note that the process of allocating income is separated from the process of charging workplaces for their use of different categories of labour, i.e the income a worker receives is not the same as the cost of labour that the workplace is charged. This will be explained under participatory planning.

Self-managed worker councils have autonomy over how they go about rating their members. The only restriction placed on them is that the average effort rating that worker councils award their members is capped. This could be done by either giving the same cap to all workplaces or by basing it on the social benefit to social cost ratio of the workplace as explained in participatory planning on the next page. The reason for capping is to avoid the possibility of workers over-estimating each others effort ratings in return for the same favour, or what could lead to “effort rating inflation”.

It is likely that workplaces will come up with different approaches to measuring effort. This will be democratically decided by the workers of an individual workplace. For example, workplaces might want to set up an effort rating committee, but the rules for number of members, length of service, rules for rotation, grievance procedures and their methods of collecting information may vary from one worker council to another. Other workplaces may wish to simply base each individual’s ratings on those submitted by their co-workers, or rely solely on self-ratings, or just on the number of hours they have worked. 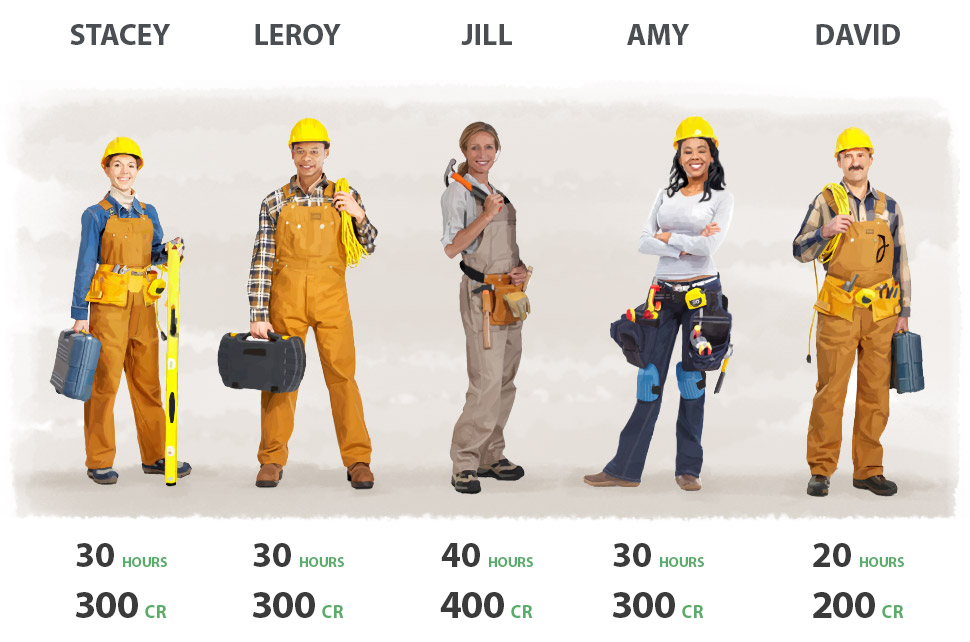 One way that the five workers at this workplace could choose to rate effort could be by the differences in the number of hours they work. In this case, Jill who works 40 hours would receive higher income (400 Credits) than David who works only 20 hours and therefore receives less income (200 Credits).

There will also be differences between worker councils in the level of accuracy they choose for grading effort. As mentioned, many worker councils may choose to use only the number of hours worked as a basis. However, other workplaces may wish to take into account intensity, using approximate grading e.g. below average, average, above average; while others may want much more precise grading e.g. a scale from 1-100. The procedures chosen will depend entirely on the preferences of each individual worker council, in accordance with self-management.

Exactly how much income individuals in the above categories receive will be decided democratically by society, including the level of income for those who are able to work but choose not to.

The full distributive maxim of a participatory economy is: Remuneration to each according to their effort or sacrifice, and need. Further issues and questions surrounding compensation based on effort and need, concerning incentives, efficiency, measurability, and so on, are addressed at length in materials elsewhere that readers can explore further in the more section.

In summary, differences in income in a participatory economy would be based on differences in the effort or personal sacrifice workers choose to make in performing socially valuable work, as judged by their co-workers. Compensation based on effort delivers economic justice, while providing adequate incentives to work. Also providing income based on need furthers solidarity towards others by providing for those in society who are unable to contribute or have suffered misfortune.